MEAT IN THE MEDIA

Omnivores beware. We are coming. Vegans are building a brigade. Our numbers are increasing nationally — internationally.

A regiment of herbivores. An advanced human that can survive purely on plant-based foods. This contingent is growing in size and in strength. We soon will take over your grocery stores, your farmer’s markets, your fast food restaurants, and your dinner tables. You won’t see us coming. There will be little warning. But we are there. Hiding. Behind the bushes (that we are nourished by). Plotting this initiative at potlucks.

You will suddenly feel better. You will lose weight. You will change the course of your current downward spiral in your health. And you too, shall become strong. Strong enough to join the Vegan Brigade.

And just when you think we cannot win. Our numbers aren’t strong enough. Our bodies aren’t fit enough. We don’t get enough protein. We’re weakened by the lack of B12 in our bodies. It is then you will be reminded …

We have the animal kingdom on our side.

Sea vegetables are very good for you. They will make you stronger and improve your overall outlook on life. Evidenced by the size and happiness of whales. Very popular in Asian culture for their healing power, sea vegetables aren’t really appreciated in North America the way they should be.

My friend, macro chef and co-author of The Great Life Cookbook, Priscilla Timberlake mentioned to me the other day that someone needs to remind the vegan community what the macrobiotic community knows so well … sea vegetables are incredibly good for you. Packed with vitamins, minerals, and nutrients not found in the same levels in land vegetables, they add amazing flavors to so many dishes.

Probably the most well known of the sea vegetables (and the one I use most often), would be Nori. This is the wrapping found on all vegetable rolls. I buy it in huge volume and always roll a sheet of warm rice, cut into 1 inch pieces and dip into ginger infused wheat-free tamari. This is a regular snack in our house and it’s easy and fun to make. Of course you can add avocado, cucumber and carrots in the roll for more flavor and color.

Grab a life vest and come aboard for a short tour of sea vegetables:

There are other sea vegetables you can use but these are the ones I have tried or used myself in recipes. The health benefits of sea vegetables are endless, so give them a try!

“What you eat should never require the hiring of an assassin.” 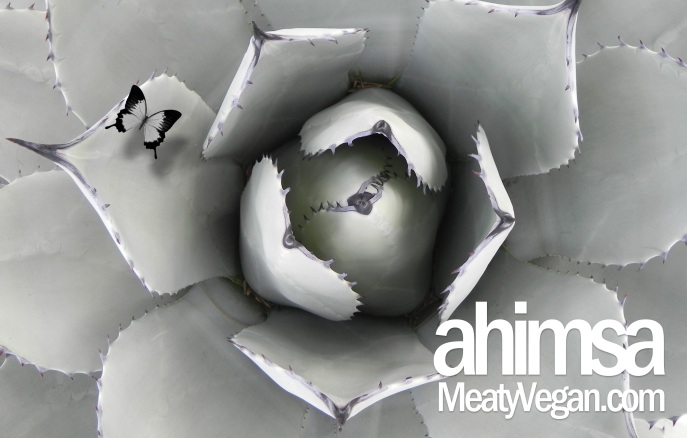 A previous blog post stirred up quite a discussion about the meaning of the word vegan. In trying to define what vegan means to me, and searching for answers to some questions posted about what truly makes a person vegan, I asked Jen what she thought.

I was going to reply to a recent comment and write five words that seemed to sum up my take on what makes a person vegan. Prompted by Mark Bittman’s “VB6” book (Vegan Before 6 PM) title, I thought I summed it well:

Of course, this is true but vegans also don’t eat dairy, eggs, or honey. They also won’t wear silk, wool, leather or any other clothing made from or by animals, or purchase products containing animal ingredients such as shampoos and lotions.

So, I came up with another way to convey my feelings by saying:

“Vegans don’t consume any product that harms animals.” This sounded very clunky and I wanted something much more precise and to-the-point.

Time passed and there was more discussion about my feelings on being vegan and what it meant to me. How it made me feel and why I chose a vegan lifestyle. I probably came up with a dozen or more short sentences in my attempt to define “vegan.”

a·him·sa /əˈhimˌsä/
noun (in the Hindu, Buddhist, and Jain tradition) The principle of nonviolence toward all living things.

That is vegan to me.

I’m not perfect nor do I strive for perfection. I am human and I am flawed. But I am vegan.

Vegans are a mysterious breed. Under normal conditions, one can’t easily spot a vegan in the wild but there are some important tips that will make life among vegans more pleasant. If you’re suspicious that a person standing next to you might be vegan, the easiest way to tell is to offer them something to eat — even a vegetable. When approached with food, a vegan will let you know they’re vegan. In fact, just approaching a vegan and starting a conversation about anything, they will begin to shake … holding back with all their might … prepared to strike at any moment… poised … ready to let you know. They. Are. Vegan.

In order for you to fully understand, and peacefully live among the Modern Vegan, published below is a checklist.

Please feel free to print this out and keep it in your wallet:

This vegan and gluten free creamy sauce is so delicious and easy to make. The only problem with this raw cashew-based sauce is that as soon as I make it … we finish it. Served over hot gluten free pasta along with my famous bread (recipe on this blog). So good! Delizioso!

Starting with raw cashews and adding the right blend of ingredients results in a thick and flavorful sauce that even an omnivore will love. Want the recipe? Share a link to my blog through your social media channel or retweet (Twitter box at the bottom of this page).

Mark Bittman, writer on food for New York Times and author of How to Cook Everything understands just how meaty being a vegan can be. The eggplant is often called “meaty,” by which we mean what, exactly? Substantial? Versatile? Flavorful? … click for more.

Or, “If Slaughterhouses Had Glass Walls, Everyone Would be Vegetarian.”

By now, nearly everyone has heard the quote by Sir Paul McCartney about slaughterhouses and glass walls. I’ll go out on a limb and say Paul meant “vegan.” There is a video on YouTube titled “Glass Walls” that he narrates. I dare you to watch it.

Few of us could deny the fact that if we had to witness the killing and bleeding of every animal we were going to consume firsthand, most of us could not eat them. Let alone enjoy eating them.

If your chicken is “free range,” it’s getting its head cut off — while still alive. One moment it’s pecking around, reading magazines, checking Twitter, minding its own business and the next, it’s shoved upside down into an aluminum funnel where it meets its maker through, hopefully, a sharp knife.

Or, those “grass fed cows” who may enjoy a few years of grazing the hills of Vermont, raising a family and enjoying the view. Standing around until their name is called, led to slaughter and ultimately death with a bullet to the head. Considering this ending, it seems just as cruel, to me, to provide a comfortable life in advance of this demise.

Everyone has their own reasons for going vegan. I was challenged, as an omnivore, to give it a try. In the first few months I started feeling different, better. Through books and films, I became educated to the health benefits of being vegan and it only took a few more months before I began thinking about the animals.

I’ll never forget the day that I looked at a herd of cattle grazing the Pennsylvania hillside and saw them as sentient beings. Cute. Happy. Cows. I was looking at the emotion of the animals as they watched me drive by. Before going vegan, I used to see a field of steaks. That day I saw a group of cows hanging out enjoying the fresh air, mooing to each other, shooting the shit, and munching on the tall grass.

In some countries they eat dog. Actual dog. They raise them to be slaughtered and eaten. Just like pigs. Pigs, who are oftentimes considered smarter than dogs, somehow are the chosen ones for us to eat. This is bacon’s fault.

These dogs are raised, fed, and murdered for their meat. It’s a rather bizarre image. A fenced in dog farm. I’m fairly confident that if alongside the chicken, pig, cow, duck, turkey, and goose frozen at your favorite Whole Foods you could also choose dog … you probably wouldn’t choose dog. So, why choose any of the others?

The arguments against the egg and dairy industries are just as compelling.

Start your vegan journey for whatever reason you like. I personally guarantee your health will improve. You’ll lose weight and your cholesterol and blood pressure numbers will head in the right direction. Medical science has proven that a vegan diet is better for your health.

It’s also better for the health of every animal.

In London? Planning a trip to London? Want to visit a vegan (and gluten free) restaurant that does everything right? Check out My Village Cafe at 37 Chalk Farm Rd., Camden NW1 8AJ London, United Kingdom. You know they know what they’re doing when they greet every visitor with a sample of soup (and know every ingredient). I’d return.

You can find them online here.

Many communities around the world are hosting a networking/social event known as “Vegan Drinks.” The name would imply that everyone brings their own Vitamix, some kale, beets, and apples to show off how they have rigged their juicer to extract liquid from a vegetable to not taste like dirt.  All of these vegetable juices (whether through a Vitamix or with a juicer) taste like dirt. Think: bite an apple; lick the ground. These Vegan Drinks events actually serve wine, beer, mixed drinks, and anything else the establishment offers (as long as they are vegan).

Fruit smoothies, by the way, are delicious. But, I digress.

Last night I attended an Ithaca-based Vegan Drinks event held at Northstar Public House. There were about 15 or so people in attendance and I knew enough of them to actually have a great time. As expected, any time you gather a group of vegans in one place, the conversation turns to food. Diet. Juicers and smoothies. I think that we all crave “real food” so much that we feel as though talking about food will somehow make eating like a rabbit more exciting.

With this said, the food (and the vegan food, especially) at Northstar is outstanding. They get it. They understand that there is a market for vegan fare and accommodate. They use creative ingredients in developing dishes that are truly delicious. Meanwhile, I ate French fries. I think I eat French fries as a way to draw attention to myself. I am a narcissist vegan.

I have attended this event at other area restaurants that don’t get it. They pass off a vegan pizza as a pizza without cheese. That’s not trying. That’s cooked round dough with sauce. Restaurants are slowly realizing that being vegan, dairy-free, and especially gluten-free, are not fads. They are legitimate diets and in some cases health-related issues that have to be dealt with on a daily basis and if you create food for us … we will come.

I am always adding restaurants to the link above so stay tuned for true reviews of places around the world that offer delicious vegan menu options.

Now, if you’re a vegetarian thinking about taking that next logical step, you should attend one of these events. If you’re an omnivore, curious about veganism, stop by. If you want to meet interesting people and talk about juicing, you’ll be more than welcome. But,  keep in mind, when ordering food … please, please, order vegan.

On a side note: Ithaca, NY (where I live) was just chosen as the Smartest City in America. Hopefully, this smartness will carry over to our restaurant owners and they will begin offering more vegan and gluten-free options!